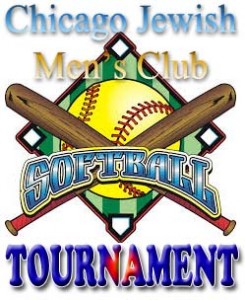 Come out to cheer on your favorite teams this Sunday (Aug 3), as the 2014 season builds to its final single game elimination tournament. Who  will be crowned* in our first Championship of the Chicago Jewish Men’s Club Softball league?

2014 Playoff Brackets and Times
In case of rain, games rescheduled to Aug 10.

You can watch the games and cheer on our over 80 players. If not in the league yet, talk it over with your clubs about joining next year. It is a great way of getting younger men engaged. Next season we hope to expand with additional Men’s Clubs from synagogues (as you can see, there are already two Reform Clubs- Temple Chai and Northbrook Temple Beth El).

For many softball action photos of both Chicago & St. Louis area teams, click on the latest Communicator 2014 Summer edition and see pages 6-8. See our earlier posts and click on links to the Flickr page for additional pictures. Thanks to our President, Michael Greenberg for proposing, and accomplishing all this in just 2 years. Michael said,
“when I started my Presidency at Region, one of the major objectives was to fill voids in the community that exist for Jewish Men. One was a Jewish Men’s Softball league. We started with a Chicago Tournament last August sponsored by Region. It was a success and clubs wanted a league. The Clubs met, a league commissioner stepped up to the plate (Michael Salberg of NSS Beth El), captains created rosters, fields and umpire secured, and the rest is history.”

So come on out and watch some action. Get involved. It’s a lot of fun.

*Trophies to be funded by Midwest Region FJMC and awarded at future club board meetings.

**Direction to Sunset Woods Park – Deerfield Rd east of 41 becomes Central.  Going East on Central, at the intersection of Central and Sunset, make a left and proceed for about 1-2 blocks. Park with diamond, parking lots are on right (East) side of Sunset Rd.